Writing with the right hand which is left

I replaced a light bulb above the sink and had to pull out the old “righty tighty, lefty loosy” before I could get the darn thing back in.  I blame being lefthanded for my confusion whenever I have to screw in light bulbs or screws and end up stalled for a while. It’s aggravating but I probably wouldn’t want to shift into right-handed world.  As someone who prides herself on being an incredibly unique specimen, I like the fact that I am one of 12% of the population.  This isn’t one of a kind, but combine it with my Margaret Rose Coleman Russo-ness and voila!  All this and left-handed, too.

There are things about being left-handed that I’m not thrilled about.  For example, I usually twist off the mop or broom head 4 or 5 times when I’m cleaning house.  Spatulas and knives aren’t angled for lefties.  OK, stirring, pouring and peeling are sometimes awkward for me.  In fact, in most foreign languages the word for left-handed equates with clumsy.  There could be a reason for that.

As a kid, it was difficult for teachers to resist saying, “Oh!  You write with the wrong hand!”  (Like I’d 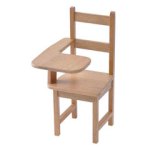 never hear that one before.) And back in the day, all desks in the classroom were  right-handed and left-handed scissors were for people in New York.  That I’m guessing about.  I just know that they weren’t available at Morrison’s 5 & Dime in downtown George West, Texas.

My aunt gave me a left-handed calendar a few years ago.  After reading that we of the sinister nature (left-handed means sinister in Latin) are more likely to be addicts, alcoholics, dyslexic, live shorter lives, and die by suicide or accident than righties, I opted out of reading the calendar on a daily basis.  Just too depressing which it turns out we left handers are also prone to be.

There are lots of nicknames for us lefties.  The Left-Hander’s Catalog is printed in England; they have a list of unflattering names that the British toss out when ‘one of us’ is in the room.  I like a couple of them.  Although I think  ‘dolly pawed’ and ‘keck-fisted’ sound kind of mean, I don’t think I’d mind being called ‘cuddy-wifted’ or ‘squiffy.’   There’s a nice ring to those names.  ‘Scoochy’ and ‘clicky’ are kind of catchy, too.

On a high point, I’m more likely to draw, swim, design a terrific computer or be elected president of the U.S. than my right-handed counterparts.  Four out of 5 of the Mac designers and 5 of the last 8 presidents have been left-handed.  That defies logic, but it puts me in interesting company!

I am a mom, a grandmom (Gaga to my 2nd oldest grand-child), a sister, a friend, a construction estimator, a homeowner, an active member of a 12 step recovery group, an artist, a reader, a survivor, a do it yourself wannabe, a laugher
View all posts by texasgaga →
This entry was posted in Hmmmm. Bookmark the permalink.