When I am unhappy or uncomfortable with a situation, I am usually reminded that “I am right where I’m supposed to be.”  Sometimes discomfort means that I need to make a change in my life.  Sometimes the most spiritual thing I can do is to accept the feeling of sadness.  I have been told, and I believe, that “acceptance is the key to to all my problems today. When I am disturbed, it is because I find some person, place, thing or situation-some fact of my life- unacceptable to me, and I can find no serenity until I can accept that person, place, thing, or situation as being exactly the way it is supposed to be at this moment.” (Pg. 417 in the 4th Edition of the Big Book)

That kind of advice has gotten a mental “Go to hell” when I am going through a bad time.  But the truth is that my resistance to pain generally causes me more pain.  It is much easier to dole out that advice to someone else.  That’s what happened yesterday.

Bob had Monday off.  He intended to use the day to bow hunt on one of the last days before rifle season starts.  He planned to make his family’s Michigander chili using some of last year’s venison and install a couple of doors for friends.

He spent the week-end stalking the big buck.   Bob saw him throughout the weekend but couldn’t get close enough to get a good shot off with the bow.  This is one of the things I like about archery hunting:  the deer stands a great chance of making it through the season.  Bow hunting takes a patience and calm that rifle hunting doesn’t.  It also takes skill that goes beyond target shooting.  Bob’s arrows land in a packed area around the bull’s-eye on the target in his backyard.  That doesn’t translate into deer meat in the freezer.  Darn deer and hogs are 3-D.

Sunday evening we didn’t see Big Buck until we were leaving.  The buck slowly walked out of the brush on the rise at the edge of the property, stood in the waning light, silhouetted against the horizon with a wind turbine behind him, and shook his antlers at Bob.  Really.  We sat there and stared as he sauntered across the sendero, paused, and did his runway walk again.  What a taunt! 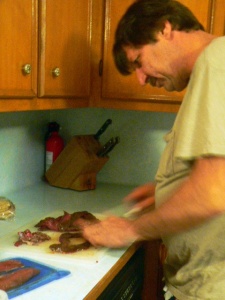 Bob took off at 5 a.m. on Monday to track Big Buck and enjoyed being outside but came back empty-handed.  Grinding venison for the chili and chopping onions, Bob was nostalgic about his dad who passed away a few years ago and, I think,  more than a  little homesick.  When the can opener broke, it seemed like a good idea for a change of scene and a trip to the grocery store.

That’s when the car key disappearance became apparent.  Bob is considerably more organized than I am and rarely just drops his keys any old place.  He sets them in the same place 96% of the time.  But they weren’t there.  He spent an hour tearing the house apart, rifling his backpack, dumping his jacket pockets.  No keys.  After an hour of futile searching, Bob gave up the hunt.

A few hours later, I came home and we resumed looking.  I was quite sure that I would be able to find the keys.  I have an estrogen powered finding device and plenty of practice because of my chaotic method of putting things away.  No luck.

We did the kind of house search that involved pulling furniture to the center of the room, sweeping and mopping since everything was out-of-place anyway.  I washed the clothes, emptying pockets and shaking out jeans.  Bob cleaned out his backpacks.  No keys.  Bob decided he might have locked them in the truck and broke into his truck with coat hanger and wire.  No keys.

I did the back track kind of thing, discovering that Bob had taken food and water out to a stray dog.  We checked the dog food container and the yard.  No keys. 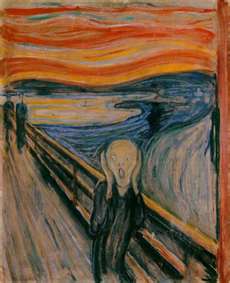 The man in The Scream was thinking about his lost keys.

At that point, we decided to go to a meeting.  Bob chaired and a friend suggested anxiety as a topic without knowing that Bob had been swirling in panic hell for the past few hours.  Good advice all around the table and a sense of calm by the end of the hour.  As Bob and I drove to the grocery store to get the darn can opener, we decided that I’d drive Bob to work, get a replacement key for the truck, and that he would have to get permission to cut the locks on his many toolboxes at work.

We had a plan for the day ahead when we got to Bob’s house. Bob wasn’t thrilled but he wasn’t agonizing, either.   As we walked into the house, I looked at the little brick wall and perched on the concrete were the keys.  All the keys.  Just sitting there.  How they got there, we have no idea.  I know they weren’t there when we left. Blasted, blessed keys.  Maybe they were in collusion with Big Buck.  Maybe the house threw in on the deal so it would get cleaned.  Whatever it was, we were right where we were supposed to be all day long.  And when we accepted that fact, we were okay.  With or without keys.

Much nicer with keys, though.

It made the chili taste better.  Michigander chili does not taste like Texas chili but it’s good and has a memorable flavor.  Here’s Bob’s interpretation of his dad’s (and mom’s) chili.

Add onions and peppers to the browned meat; saute til onion is translucent.  Add remaining ingredients to a Dutch oven, bring to a boil, turn down heat and slowly simmer for a couple of hours.  Add water if necessary.  (You can crock pot it instead.)  Serve with oyster crackers and top with grated cheese.

I am a mom, a grandmom (Gaga to my 2nd oldest grand-child), a sister, a friend, a construction estimator, a homeowner, an active member of a 12 step recovery group, an artist, a reader, a survivor, a do it yourself wannabe, a laugher
View all posts by texasgaga →
This entry was posted in Family, Food, Hunting and fishing, Recipes, Sober Life and tagged sober life, venison recipe. Bookmark the permalink.