Bob and I were watching American Restoration on the History Channel last rainy Sunday.  One of the featured items slated for a makeover was an old Kotex dispenser which was to be auctioned at a breast cancer fundraiser.  This was an old one; it dispensed feminine protection for a nickel which puts it before MY time.  There was a lot of sniggering when the show’s star sent his teenager to buy sanitary pads at the local drugstore so the machine could be calibrated.

I never had much embarrassment over periods and all things menstrual.  I have two sisters, no brothers, and a dad who had 6 sisters.  It comes once a month.  It doesn’t go away for 30 or 40 years.  It’s a fact of life.  With that said, I wasn’t very sympathetic with my daughter when she came home in the 5th grade after health class.  The teacher suggested that the girls obtain a stockpile of appropriate hygiene products for that impending time of the month.  Although I had some pads, they weren’t the ones shown in her “A Girl’s Special Time” booklet so we had to go to the grocery store.

As we walked to the checkout with our little bundle of joy, she started hissing at me, “Mom!  Mom!  STOP! There’s a boy from my class on the next aisle.” (So?)  “The boys were having their class while we were having ours.  He’ll KNOW.”  (Know what?) “Why you are buying those things!”  Grabbing my arm, she tugged me into the next aisle where we feigned interest in tomatoes for 10 minutes.  Eventually, we serpentined to the register, casting glances over our shoulders like a couple of shoplifters, paid up, and slithered out of the store with our purchase securely double bagged.

I hadn’t thought much about that for awhile.  Today, my bathroom cabinet has a shelf full of different types of pads.  Not for me.   I had a hysterectomy 14 years ago.  Every female who has had a monthly while visiting my house uses a different product.  You wouldn’t think there were so many, but ones for light days, heavy days, with wings, without wings, and liners line up on the shelf.

There’s not as much embarrassment about buying the product today as in years past. Disposable pads have been around for the last hundred years or so.  Kotex has been around for a long time, but it is not the first disposable pad for women.  Curads, the band-aid people, advertised a product in Vogue in 1920; Johnson and Johnson made Lister’s Towels in 1896.  Hartmann’s in Germany introduced a disposable pad marketed throughout Europe and in the U.S.

The Kimberly-Clark Company made bandages from wood pulp for WW I soldiers.  Nurses in France used these bandages for menstrual pads because they were absorbent and cheap enough to throw away.  They were later marketed as Kotex. 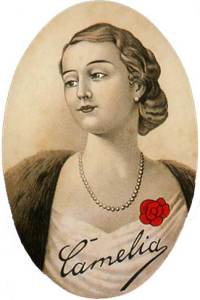 By the 1920’s Germany started marketing Camelia which, like Kotex, is still manufactured and used today.  The product’s name comes from a play about a prostitute who wore a white camellia on her lapel when she was “receiving” and a red one when she was menstruating. The boxes allowed a woman to store them with a blank side facing out, concealing the contents. American college women wanted menstrual pad boxes that had a similar design.  Camelia early on put a slip of paper inside the box that the customer could bring to a female clerk; the slip’s text asked for a box of Camelia.  This was similar to the manufacturer’s suggestion that Kotex boxes sit on the counter next to a coin box. No need to exchange words in either case.

The pictures and information about early disposable pads comes from www.mum.org (Museum of Menstruation and Women’s Health).  Seriously.

I am a mom, a grandmom (Gaga to my 2nd oldest grand-child), a sister, a friend, a construction estimator, a homeowner, an active member of a 12 step recovery group, an artist, a reader, a survivor, a do it yourself wannabe, a laugher
View all posts by texasgaga →
This entry was posted in Family, Hmmmm, Uncategorized, Women's issues and tagged disposible pads, feminine hygiene products, menses, Sanitary napkin. Bookmark the permalink.