Not celling myself short

Today, Bob left his cell phone at home.  My first inclination was to call him to tell him that he had forgotten it on the bed.  I got as far as the first 3 digits of his phone number and realized I was looking at his phone.

I felt like Mary Ann a couple of weeks ago.  We were waiting in the car for Claire to get out of Starbuck’s and I wondered aloud if she was nearly done.  Mary Ann yanked up her phone and dialed Claire’s phone number.  Claire’s phone, which she’d left in the car, started ringing and GE and I started giggling.  “Why isn’t Claire answering her phone?”  (Louder laughter from the front seat.) “I KNOW I have the right number!  Why are you laughing?  It isn’t funny! ”  (GE and I couldn’t look at one another.)  “I have the right phone number.  I do!  (My belly ached from laughing.)  “Why won’t she answer her phone?  She’s….Oh!  Never mind!” (Mary Ann finally noticed the phone ringing in the seat beside her.)

Those dumb phones are an extra appendage for me.  I don’t even have a smart phone, but my phone serves as my day planner and alarm clock.  It is nearly always in arm’s reach.  Unless you are my daughter or granddaughter, I don’t know your phone number by memory.  When my SIM card has gotten fried, I’ve lost all contact with the outside world. 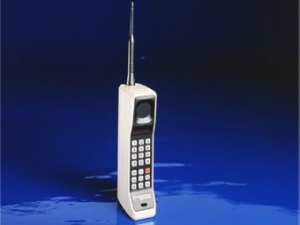 The first cell phone I used was my boss's. It weighed 2 pounds, was made by Motorola, and cost $3,995. It could store 20 phone numbers. (Photo thanks to PC World)

I didn’t grow up with a cell phone to serve me; they didn’t exist until 1973 when Dr Martin Cooper, considered the inventor of the first portable handset, made the first call on a cell phone. Dr. Cooper was the GM for Motorola at the time.  They went public in 1977 when they were test marketed in Chicago first, then Baltimore and Washington DC.  Japan began testing the cell market in 1979.

I started working in construction in the 70’s and used a cell phone for the first time when GE and I drove to Austin to drop off bids for my boss at TxDOT.  Roy’s phone would stay charged for about an hour; we kept it plugged in to the cig lighter where it regularly drained the car battery. 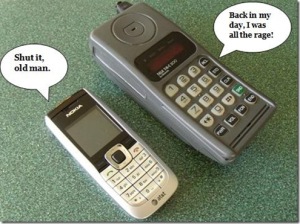 The first time I owned a cell phone was in the mid-90’s.  The phone cost $200 with a 1 year contract; the $40 monthly charge paid for 300 minutes a month.  There were roaming charges and long distance charges applied so the bill was rarely as low as $40.  Today, I’ve got unlimited everything for not much more than that.  GE and Jonathan got me a phone with keyboard which has been a challenge.  I have watched Nina and Savanna visit with me, watch a movie, and use their keyboard without a glance down so I know it isn’t too much to learn, but there is possibly an age limit on that technology.

A survey on MSN asked folks whether they (a.) wouldn’t go anywhere without their cell phone; (b.) can take or leave their cell phone; (c.) refuse to be tied to a blasted phone.  The majority of people answered b with the rest split between a and c.  I suspect they might change that answer if they asked their spouses and children whether they should carry a phone.

Last week Diana, Max’s wife, left her phone in her car when she made a spur of the moment decision to go to Mass with her grandson.  Diana’s a “I don’t like carrying a phone” kind of woman.  Immediately after Mass, there was a program for grandparents and parents of kinder students.  Noah had forgotten to bring home the note.  By 10:40 when Diana got into her car, she had 30 calls from Max, 12 from her dad, 14 from her daughter, 3 from her son, and 2 from me at the office.  The hospitals had been checked and the police had already told Max that she had to be missing longer than 3 hours for him to make a missing person report.

I think she needs to rethink her phone allegiance.

I am a mom, a grandmom (Gaga to my 2nd oldest grand-child), a sister, a friend, a construction estimator, a homeowner, an active member of a 12 step recovery group, an artist, a reader, a survivor, a do it yourself wannabe, a laugher
View all posts by texasgaga →
This entry was posted in Family, Hmmmm, Humor, Uncategorized and tagged Cell phones, humor. Bookmark the permalink.

6 Responses to Not celling myself short