I was going to add “home killed” which is what Bob says when we can incorporate herbs and peppers from the garden with venison, hog, turkey, duck, or fish that he or Bobby brought home.  But that just sounds too Silence of the Lambs.  In truth, we don’t have much in the way of a garden, but what we have is flourishing.  It’s a salsa garden with tomatoes and peppers (banana, serrano, bell and, I think, Anaheim) and miscellaneous herbs in the house and outside.

We planted the bell peppers last year.  They didn’t do anything last summer except look decoratively green, but after the first of the year they started blooming up a storm and producing bell peppers like they were on steroids.  (We have a natural garden so we used no steroids in the production of these peppers.)  We had venison stuffed peppers last week and last night we had venison fajita taquitos.

I especially like it when we have a mixture of colors for the peppers.

Cut tops off peppers and seed.  Combine meats with veggies and herbs; squish together with tomato paste until mixed.  Salt and pepper to taste.  Pour 1/2 c. of water into the bottom of the crock pot.  Stuff peppers and set in crock pot; fill spaces between with the extra meat.  Cover crock pot and cook on low heat for 8 hours. 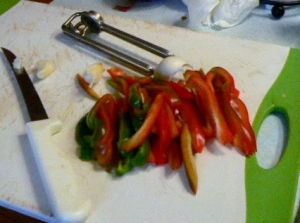 Night before last we had venison fajitas.  There was a wealth of peppers to slice and cook with the venison steak.

I rinsed the pieces of steak, rubbed them with adobe chili pepper, and bashed on them for a bit with the meat mallet.  I put them in a plastic bag with the juice of 3 limes to tenderize while I sliced the veggies.

We softened the peppers, onions and garlic in the cast iron skillet with a little olive oil, taking them out of the pan and adding a little more oil to heat while we sliced the steak into fajita-esque pieces.  After stir frying the meat, Bob dumped the peppers and company into the skillet along canned tomatoes.  We covered the skillet and reduced the heat to lowlowlow for 20 minutes while I combined chopped tomatoes, onions, and avocado with minced cilantro and serrano pepper.  I sprinkled the mix with lime and liberally dusted with garlic powder.

When we were ready to eat, we warmed tortillas, added the meat, and topped with avocado salsa, sour cream, and grated cheese. Happy tummy.

Home grown and home cooked (but killed out in the wild).

I am a mom, a grandmom (Gaga to my 2nd oldest grand-child), a sister, a friend, a construction estimator, a homeowner, an active member of a 12 step recovery group, an artist, a reader, a survivor, a do it yourself wannabe, a laugher
View all posts by texasgaga →
This entry was posted in Food, Hunting and fishing, Recipes, Sober Life, Texas, Wild game cooking and tagged Slow cooker, venison. Bookmark the permalink.