Center of the universe

If “You are here” and I am standing next to you, you are right at the center of the Universe. In my mind.

If I say, “I am not the center of the Universe” at an AA meeting, there will be a chorus of “No.  I am!” and lots of chuckles.   I don’t know if normies consider that good things happen because the Universe wants to reward them and that bad things happen as vengeance from the Universe, but this alkie does.  At least sometimes.

A couple of Fridays ago, my best friend told me that come February, she would wear the title of Grandmother.  Less than an hour later, my little sister told me that she’d passed her teacher qualifying test.  Finally.  To say she isn’t a good test taker is like saying that ice cream is best eaten when frozen.  She had stopped telling us she was taking it; we knew because we’d get a shaky little sob-laden voice on the phone when she got the results.  After months of self-defeating talk, she has passed the test and is now a certifiable teacher.

Good news!  Great news!  I felt like the Universe was smiling on me even though I had nothing to do with either event.

The next afternoon I got in my 04 Mazda Tribute and it wouldn’t start.  This Mazda is a biting fly.  I needed a car after the company I worked for shut its doors and the Merc Marquis they gave me got totaled in a rear end collision.  Not my fault, but I was unwilling to get a lawyer to weasel out extra $ from Brand X insurance.  With the settlement money, I bought the Tribute.  I got it at a radically reduced price thanks to my daughter GE who has no fear about tossing out a low ball.  Thank heavens for the savings because I’ve used every bit of it to fix the darn thing.

It is evident that someone who treats their cars like I do had been the prior owner.  I suspect that whenever someone truly evil dies, their penance is to return to earth as a car I drive.  Evidently the previous owner of my Trib was part of the same reincarnation cycle.  I held it together pretty well since I’ve been anticipating the need to trade in Ms. Mazda.  Cars break down.  It isn’t personal.  (Oh, well.  I’ll trade it in this month instead of waiting until October.)

It was when the pipe in the wall between the kitchen and bathroom broke and spewed grey(ish) smelly water all over the cabinet floor that I started to resent the Universe turning its eyes on me.  Like it cares.

But I am the kind of person who prays for the light to change when I’m running late for work, childishly certain that the Universe is foiling my attempt to make a 20 minute drive in 15 minutes.  What a nutter mutter!

I spent most of last week getting ready for a baby shower for Bob’s daughter; Bob’s house was party central.  I turned into a Tasmanian Devil by Thursday; by Saturday, my T.D. had gone rabid as I snapped and snarled at anyone who got in my way.   I took every setback, which were all minor, as if they were assassination attempts.  At one point, my daughter pinned me with her jade ice stare and said, “We are all on your side, but if you want to do this by yourself, we can leave.”

I joked later that my workforce had threatened to strike to protest working conditions.  (Ha, ha, ha)  That got some yucks from people who weren’t present during my reign.  The truth is that GE’s green eyes were glossy with tears.  I had become the center of the Universe, a force, a power.  I had stopped being a mom, a worker among workers.  Friends and family surrounded me and I’d treated them like serfs.

If I had called a friend in AA, they would have asked something silly like “Did you pray this morning?” (Of course, I …… didn’t.) It is so easy for me to turn agnostic.  I didn’t understand that word when I first got sober, thinking that it was a fraternal twin to atheism.  My truth is that I often become agnostic as I run around Little Red Hen-ning the world around me because I’m saving God the trouble.  So far, I haven’t gotten an omniscient thank you note.

I needed my daughter’s splash of cold water to return to clarity.  There was nothing so important that I needed to bully my helpers.   Many hands did the work better than I could do it alone. 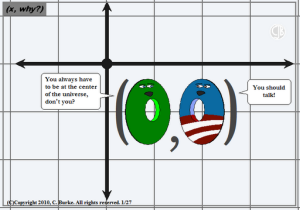 Being the center of the Universe is a lonely place.  Nicer to have my feet planted at a table of friends and family instead of looming over them.

I am a mom, a grandmom (Gaga to my 2nd oldest grand-child), a sister, a friend, a construction estimator, a homeowner, an active member of a 12 step recovery group, an artist, a reader, a survivor, a do it yourself wannabe, a laugher
View all posts by texasgaga →
This entry was posted in Family, God, Humor, Relationships, Sober Life and tagged family, God, Love, sober living, sobriety, Texas. Bookmark the permalink.