I was trying to think of some clever title wrapped around the axis but it’s early in the morning and I am all out of clever.  Or maybe my clever hasn’t been regenerated.  It could have atrophied for lack of use since I don’t exercise my clever often.

From the first time Bob saw axis deer up in the Texas hill country, he wanted one.   When Bob says he wants a deer, he wants to kill it.  He has shot and we have eaten more deer in the past year than most people do in their whole lives.  Maybe most villages of people.  But he had never shot an axis deer or a fallow deer which are both common but not native to southwest Texas.

Male fallow deer-there were herds of them in downtown Leakey, Texas. See how he tilts his head? They run like that to keep their antlers from hitting low hanging branches. Seriously. (Photo credit: Wikipedia)

I hadn’t heard of either axis or fallow deer before Bob came back from a 2010 hunting trip with Bobby and my nephew and brother-in-law.  He saw them, he stalked them, he studied them, he didn’t get a good shot off at one.  When we talked about camping in that area of the state this summer, he plotted the demise of an axis deer with the same efficiency he employs when building a woodworking project.

There’s no hunting season for axis or fallow deer in the state of Texas.  They are exotics if you read the special permit hunt descriptions provided by Texas Parks and Wildlife.  Fallows originally came from Europe and the middle East.  Fallow herds are in Texas and a few other states.  Axis deer originally came from Asia, introduced in mid-19th century Hawaii when Hong Kong gifted the reigning king.  Hawaii considers them a pest since their herds have grown 20-30% each year.

Axis deer off ranch road between Leakey and Rocksprings, Texas

The King Ranch in south Texas, Bear Creek Ranch near Dallas, and the YO Ranch near Kerrville imported them to our state in the early 1930’s.  Axis deer love Texas and have flourished especially in the Edwards Plateau region of the state which has terrain similar to their home country of India.  According to Texas Parks and Wildlife, about 67% of the exotics in Texas live in the Edwards Plateau region and axis deer are the most common exotic.

Axis don’t have a breeding season like white tail deer; there are fertile females throughout the year.  Males with velvet antlers are subservient to those with hardened antlers.  Unlike white tail deer, axis hang out in herds of both young and old animals of both genders; the herds can exceed 100 deer.  They are anatomically more like elk than our native deer.

Bob took off from our campsite too late in the morning for serious hunting but hoped to trail some deer and shoot one in the evening.  His excited whisper 30 minutes later surprised me:  I got one!  He came back to get me so I could help him field dress the animal.

I’ve lost count of the number of deer and feral hogs that Bob shot, strapped to the bed of his truck, and brought home.   Only one alligator and one rattlesnake met their demise at Bob’s hands so the reptile count is definite.  Usually Bob has his son or a couple of friends help him in his butchery.  My usual role is to make sure there’s plenty of freezer paper and tape and that the supply of Sharpie markers hasn’t been used as teething toys by Halo Hound.  I generally clear and bleach counters and set out the grinder.   Then, I go some place else. Any place else.

Imagine my surprise when I had to help Bob string up, skin, and gut the blasted creature.  It was at least 85 degrees in the pecan bottom and shade didn’t cut the heat at all.  The deer weighed 150 lbs.  That’s a guess since we got about 100 lbs of meat off him.

There are noises to butchering that I don’t like and which haunted my sleep for the next few nights.  Bob would argue that point since he thinks hibernating grizzlies sleep lighter than I do.  Nonetheless, there were more cracking and ripping  noises than I like thinking about.

I stayed detached since I photographed the process when I wasn’t having to hold the deer’s hooves so Bob could skin him.  There was a point when the abdominal cavity flopped out that could have been unpleasant.  It was surprisingly low odor since nothing burst.  Not a happy thought.

Playing in the cold creek after the field dressing experience was great!

By the time Bob finished, I felt like I’d done duty in a field hospital after the Battle of Gettysburg.  It was the right time of year, too, but at least 20 degrees hotter in Texas than Pennsylvania.  Georgie and the kids arrived while Bob was gathering deer parts to sling in a swale for travelling coyotes and hungry bobcats.

Bob brought the deer skin down to the creek, weighted it down alongside our cousin’s little dock, and let the small fish do some cleaning on it.  A few hours later, the skin was a little cleaner, the small fish were replaced by larger ones, and a couple of snapping turtles were wiping their mouths after a minnow lunch. 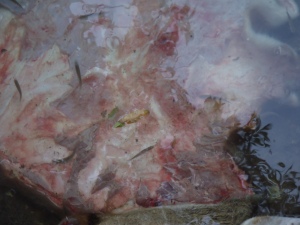 We found a local butcher shop who could process the deer before we had to leave on Sunday.  It cost less than a dollar a pound and we didn’t have to worry about hauling out the bone saws and grinder after a 4 hour drive home.  Very nice to skip the butcher assistant job!

I am a mom, a grandmom (Gaga to my 2nd oldest grand-child), a sister, a friend, a construction estimator, a homeowner, an active member of a 12 step recovery group, an artist, a reader, a survivor, a do it yourself wannabe, a laugher
View all posts by texasgaga →
This entry was posted in Family, Hill country, Humor, Hunting and fishing, Relationships, Sober Life, Texas and tagged Chital, Deer, Edwards Plateau, Hunting, Texas, Texas Hill Country, Wildlife. Bookmark the permalink.