I can’t imagine life without a pet.

“Look, Mommy! The cat is smiling at me!”

I was the little kid who picked up cats that were crazy wild as they tried to escape my chubby arms, sure that I was rescuing them from their hiding place under the car.  Every stray dog that crossed our yard “needed me”; I sneaked scraps of food out to them.

Although we had many cats, we had few dogs.  My dog, my first dog, was a brindle stray male who showed up at our house with a remnant of rope around his neck. He was lean, a canine James Dean who staked a claim on our front porch within hours of getting his first bread crust.  We named him Dismal after the dog in one of our favorite mystery stories.  He loved chasing our car, racing along side it to the grocery store, tail held high and waving, proudly guarding it while we shopped.  Mother hated him.  He was an embarrassment to the family.  He wound up dying at the hands (paws) of the parist priest’s chows whom he taunted for years, a free dog outside the fence.  They got out one day and used Diz as an example to other free dogs. 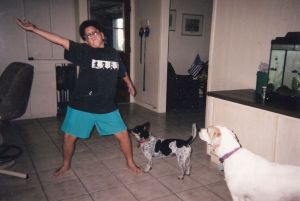 11-year-old Jack with General and Jewel

Most of the pets that have come into my life have been volunteers.  My son brought home a lab mix puppy and asked the inevitable “Can I keep her?”  He told us a man was selling puppies for free; we never could find that man so we could return the pup.  Jewel was a great dog.  About a year later, a six toed calico showed up.  We dubbed her Ginger and she became my son’s cat.  Jewel slept on the foot of his bed, Ginger curled around his head and groomed  his nappy hair.  My pet was a funny little healer mix who showed up at the steel yard where I worked.  The yard guys named her General because she herded forklifts and people.  I ended up taking her home when she tried to herd an 18 wheeler.

I’m down to one dog today, a blind and ancient Boston terrier.  I crossed 3 lanes of traffic on the crosstown in Corpus to rescue her as she tried to scale the median and find her way home.  She’s a sweet old girl.  She was sick a couple of months ago and Bob took her to the vet who asked if we had considered having her put down.  I don’t THINK so! was Bob’s answer.  One more reason why I love that man.

There are so many reasons why I am grateful that I have pets.  I was at the hairdresser’s a couple of months ago and a client, who had lost his old pup, said that he’d never have another dog, the heartbreak was too much.

General was a wise dog, but she’s only pretending to read.

The heartbreak is terrible when you lose your pet, but I’ll risk it.  They say that a house isn’t a home without a pet and I agree with that.  I am thankful for the love and loyalty my dogs show me.  Josh Billings, the 19th century humorist, wrote that “A dog is the only thing on earth that will love you more than you love yourself.”  I can speak sharply to them or forget to feed them until late and they will still greet me with wagging tails and a look that says, “You’re home!  I love you!  Wow!  I missed you!”  The front porch cat gives me the hairy eye and mews to remind me that I’m late.  I think that’s proof that dogs have owners and cats have staff.

I am a mom, a grandmom (Gaga to my 2nd oldest grand-child), a sister, a friend, a construction estimator, a homeowner, an active member of a 12 step recovery group, an artist, a reader, a survivor, a do it yourself wannabe, a laugher
View all posts by texasgaga →
This entry was posted in Corpus Christi, Family, God, Gratitude, Grief, Pets, Sober Life, Uncategorized and tagged animals, family, Josh Billings, nature, Pet, sober living, Texas, Thanksgiving. Bookmark the permalink.