The first holidays after I lost my mother were tough.  I realized there wasn’t any “over the river and through the woods” to grandma’s house anymore.   I was the grown up now.  Such a weird feeling.

Hard as that was, it didn’t compare to the first holidays after my son died.  2009 was the year that I had to call in sick not because of illness but because of grief.  It was too much on some days to put on the face and pretend like life was normal.   Holidays and anniversaries were death by 1,000 cuts.

The grief was offset by joy when I spent time with my grand-daughters; when GE announced that she was pregnant with my first grand-son; when she asked if she could honor her brother by scheduling her C-section delivery on December 7, his birthday.  Welcoming his nephew was a beautiful way to celebrate Jack’s birthday.

At GE’s house after the birth, I wondered how to keep Jack in our Christmas.  He was so ready to celebrate that his absence stabbed my heart.

I read about folks who set a place at the table for their loved one or gave gifts away in their name.  That sounded good, but it didn’t fit.  There was no comfort on that night as I sat in GE’s house reflecting on Travis’ birth, Jack’s death. 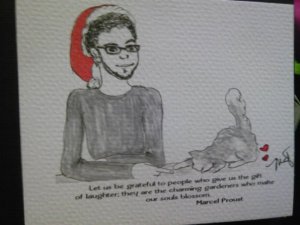 Sketching has always been my favorite distraction.  As I thought, I sketched a little anime drawing of Jack with a Santa hat.  I added a sketch of his cat Ginger who died 10 months after Jack’s death.  That’s when I decided to draw my own Christmas card with Jack’s picture on it.  As I drew, I talked to Jack, telling him about his nephew and his nieces.

Each year since 2009 I go to the Hallmark store just in case I can’t draw a card,  but I get an inspiration and the card comes together.   It’s a blessing to sit quietly, talk to Jack, and draw. 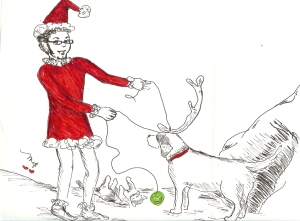 We lost Jack’s dog, Jewel, in 2010. I could see his 9-year-old face in 1997 when he asked John and me if he could keep her:  “They are selling her for free!”  After he died, she waited at the front door for him to get home.  I added her to the Christmas card as Max from How the Grinch Stole Christmas. 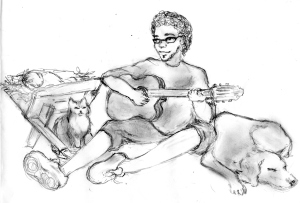 In 2011, I spent a few hours in the ER waiting for a friend to see a doctor and listening to “Little Drummer Boy” on continuous loop. 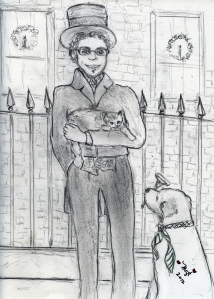 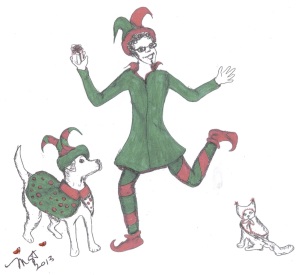 Bob and I started our  home remodel in 2013 and I found some of his poems.  Remembering his light-hearted spirit, his silliness, his resilience, I drew him as an elf. 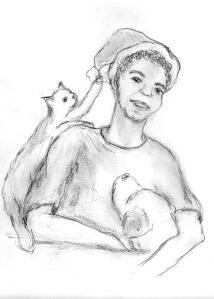 Over Thanksgiving 2014, a friend of Jack’s sent me some photos of Jack.  Just looking at his laughing face made me teary.  All I could do was draw him as he looked in the pictures adding Jewel and Ginger. 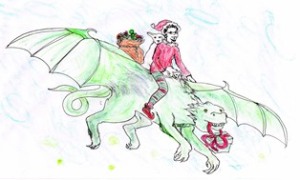 And in 2015, after re-reading Eragon, a book Jack and I read together, I sketched him on a dragon.

The inspiration comes when I sit with my sketch pad and pencil.  So far, it always comes together.  It sounds silly, but it’s my son’s legacy to me.  Bob’s little cousin Makayla loves drawing.  When she and her family visited this month, she confessed that she was shy about showing her drawings to people.  I told her that I am always uncomfortable about my art, but I lose the self-consciousness when I am drawing those cards.  It’s not about me.  It’s about that my crazy-head, my son Jack.

I am a mom, a grandmom (Gaga to my 2nd oldest grand-child), a sister, a friend, a construction estimator, a homeowner, an active member of a 12 step recovery group, an artist, a reader, a survivor, a do it yourself wannabe, a laugher
View all posts by texasgaga →
This entry was posted in God, Gratitude, Grief, Holidays, Relationships, Sober Life, Uncategorized and tagged Death, family celebrations, Grief, Grief Loss and Bereavement, grieving, loss of a child, sober living. Bookmark the permalink.

3 Responses to Christmas in July