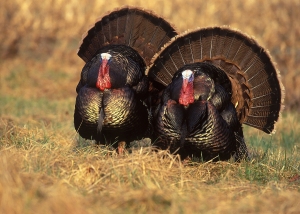 You better watch your back, Bald Eagle.

I don’t know much about wild turkey except that Ben Franklin wanted it for the national bird of the United States.  It would have been a good choice.  Turkeys are one of only two native birds to North America.  The Muscovy duck is the other but they didn’t even make the suggestion list for national bird.

By the early 20th century, hunting and destruction of their favored woodland habitat virtually wiped out wild turkeys.   Wild turkey reintroduction programs began in the 1940s, and the birds were relocated to areas where populations had been decimated but woodlands were recovering.  That worked so well that wild turkeys now live in areas where they may not have lived when Europeans came to America. Today, flocks are also found in Hawaii, Europe, and New Zealand.

Even though wild turkeys are fatter than their domesticated cousins, they are more agile and cunning.  They can run 20-25 mph and fly up to 40 mph.  Females lay 4 to 17 eggs, and feed their chicks for a few days. Young turkeys quickly learn to fend for themselves.   Males take no role in the care of young turkeys.

Wild turkeys are the same species as domestic turkeys, but they have a very different taste from farm-raised turkeys.  All wild turkey meat-even the breast- is  “dark” with a stronger flavor. Seasonal variations cause changes in flavor leaving wild turkey meat with a gamier flavor.  Wild turkey that has fed on insects has a more intense flavor while a diet of grass and grain give the meat a milder flavor.

Bob’s turkeys were most likely Rio Grande turkeys, but both Eastern and Rio Grande turkeys live and can be hunted in Texas.  Bob said that they were running hard across the field when he took a shot and downed two turkeys.  He field dressed the birds which means he gutted them, removed entrails, severed and cut out the windpipe, heart, and lungs, and dismembered the turkeys since we weren’t cooking them whole.  I have added hunting butchery to the list of male responsibilities.  (Driving and car repairs had previously topped the list, but gutting animals-large or small, comes in a close third.) 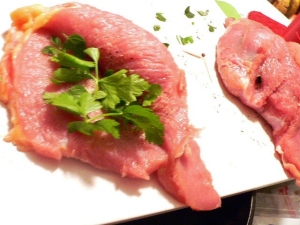 We had three turkey supper nights from two of the wild turkey breasts.  The first day, I slit a pocket in the breasts, filled them with peppered bacon, rosemary, oregano, and parsley, and rolled them shut, securing them with toothpicks since Bob’s house didn’t have twine.  I put them in the crockpot on low heat, covered them with 2/3 cup of chicken broth, 1/3 cup of apple juice and 1/3 cup of rice vinegar, mushrooms and more herbs.  They cooked all day while we worked. When I got home at 6, I took them out of the crockpot.  We made gravy by mixing a couple of tablespoons of cornstarch with chicken broth and adding it to the liquid in the crockpot.  I turned the crockpot on high while I finished the rest of our dinner.

The next night, we made turkey pot pie.  We softened celery, onions, and red pepper in olive oil, made a roux with flour, added the night before’s gravy with another cup or so of chicken broth, and some cut up potatoes and carrots.  After the potatoes were tender, we added chopped up turkey and peas and heated everything together.  There was more “stew” than room in a pie pan so I pulled out 1/3 of the mix for soup on night 3.

Lucky for us, Chelsea had left some frozen pie crusts so our pot pie got top and bottom crusts.  Brushed with beaten egg, the crust was golden and shiny.  It took about 30 minutes for the crust to get done-long enough to make a salad.

On the 3rd night the reserved turkey mix was great as soup with the addition of broth, seasonings and more vegetables.  We got to eat it along with toasted sunflower bread and a salad of pickled cukes and onions sliced on the mandolin that GE and company gave me for Christmas. 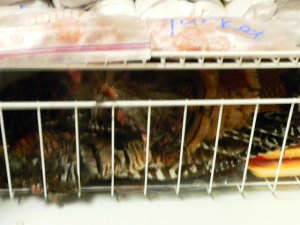 We still have more turkey in the freezer and plenty of turkey feathers.  I thought Bob was a little silly to have saved them until I saw how pretty and iridescent they are.  I am not sure how we will preserve them, but the National Wild Turkey Foundation has a whole section on how to make a cape with the turkey feathers.  I was wondering how much of a fashion statement I might make at my niece’s wedding in April, but it turns out the turkey cape is mounted on the wall (and not me).

I am a mom, a grandmom (Gaga to my 2nd oldest grand-child), a sister, a friend, a construction estimator, a homeowner, an active member of a 12 step recovery group, an artist, a reader, a survivor, a do it yourself wannabe, a laugher
View all posts by texasgaga →
This entry was posted in Family, Food, Hunting and fishing, Recipes, Wild game cooking and tagged Wild game cooking, wild turkey recipes. Bookmark the permalink.